It’s been a while since I had a local cultural experience to blog about, but my Significant Other’s birthday provided the perfect excuse to head along to the Wanganui Opera House and hear the New Zealand Air Force band in concert, performing music from, and inspired by, the stage and screen.

We were not disappointed. A loose interpretation of the central theme opened the way for a wide variety of thoroughly enjoyable pieces, from the opening ‘Thunderbirds March’ (which saw the band members running in to take their places to an extended drum-roll before launching into the piece, which made for a very effective entrance), through D. Maclean’s ‘The Gael’ from the movie ‘Last of the Mohicans’  with its stirring bagpipes, to two impressively well-executed drum ensembles, a touching rendition of the ‘Love Theme from Cinema Paradiso’ by A. Morricone (which featured one of the only stringed instruments in this brass band, a cello solo by Leading Aircraftman Toby Pringle), to the final piece, a medley of pop songs in tribute to the many popular artists who passed away in 2016, every piece was a winner. 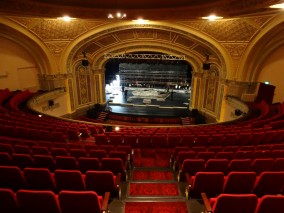 The highlight for me, however, was a playful number called ‘Variations on a Ringtone’. Featuring excerpts from various well-known classical standards, all returning to the well-known original Nokia ring-tone which ‘interrupted’ the opening bars, this piece was put together to showcase the talent of Leading Aircraftman Oscar Laven, who over the course of the piece played solo and without sheet music on a dozen instruments, including the kitchen sink. Yes, really! A novelty piece to be sure, but so well executed and genuinely engaging that the audience was hooked.

Even my Significant Other, who had some doubts about his birthday present, thought it wasn’t half bad, and you can’t really say better than that.