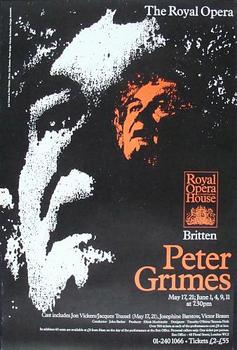 The accusation that opera is utterly unrealistic is hard to apply to Benjamin Britten’s (1913-1976) 1945 work ‘Peter Grimes’. Loosely based on a narrative poem by George Crabbe (1754-1832) it’s a tale of small-town gossip and prejudice and its devastating effect on the life of the social outcast Peter Grimes.

The opera opens in a courtroom where the fisherman Peter Grimes is on trial for the murder of his young apprentice, who died during a three-day fishing voyage. Peter claims that he died of thirst after they were unable to make landfall and their water ran out. While the villagers, led by the gossiping widow Mrs Sedley, are adamant that he is guilty the coroner, Mr Swallows, clears him without trial, but urges him to hire a man to help him rather than taking on another apprentice. Nonetheless, with the assistance of his few friends in the village, the retired sailor Balstrode and the schoolmistress Ellen Orford, that is exactly what Peter sets out to do, sending to the workhouse for a suitable boy.

Life in ‘The Borough’ is a grim, hardscrabble existence, lived at the mercy of the sea, and it is perhaps no wonder that the villagers are a grim, hard people, who take their pleasure where they can. This is primarily in ‘The Boar’, the pub run by ‘Auntie’, and in the arms of her two ‘nieces’. Even the local Methodist preacher is not immune to the lure of drink and loose women.

It is in The Boar that the continued suspicion and resentment of Peter finds its most vocal expression, and Peter himself doesn’t help his own case. He’s a dour loner who believes that the key to winning the villagers over is to work harder and become wealthier than anyone else, then marry Ellen (who, as Balstrode points out, would take him just as he is) and become a successful merchant. This is why the assistance of his apprentice is crucial, but it quickly becomes plain that Peter, while not intentionally cruel, is cold and harsh, and has absolutely no idea how to care for a child.

When Ellen notices a bruise on the boy’s neck things swiftly unravel to a tragic end.

This was the opera that made Britten’s reputation as the foremost British composer of the middle part of the 20th century, and while his music isn’t especially to my taste I can see why his works were so successful. The version I watched, a 1969 BBC production, did an excellent job of capturing the grim nature of the work with flat colours and some excellent acting by the chorus. Britten’s partner, Peter Pears (1910-1986), was a suitably embittered Grimes in a role which Britten wrote for him, while Joan Cross (1900-1993), with whom Britten also worked closely, poignantly portrayed a woman whose plain, careworn looks belie her true inner beauty.

In Crabbe’s poem, Peter Grimes is most definitely a villain, but Britten goes with a subtler ambiguity: we have only Peter’s word that he didn’t murder his first apprentice, and his actions towards both Ellen and his new apprentice, John, are callous at best. The result, as I said at the start, is something very different and far more morally complex than the other operas I’ve watched, and well worth checking out.