Recently the Significant Other treated me to an evening out in Palmerston North where we attended performances of Mozart’s and Fauré’s requiems. In classical music requiem, or more properly Requiem Mass, is a musical setting of the Catholic religious service offered for the souls of the deceased. Originally performed most often in the context of a funeral, the beauty of the music written for these services is such that requiems are often performed, as they were on this occasion, for their artistic value alone. END_OF_DOCUMENT_TOKEN_TO_BE_REPLACED

Having finally upgraded my internet to a whole 40GB a month, I have more data than I know what to do with. So, what does an admittedly slightly odd person do with so much data? Why not Google a list of the world’s most famous operas and see what YouTube can produce?

Of course, watching an opera on my computer screen is nothing like watching it live on stage, but there are a few advantages. Like being able to watch it in my pyjamas. And not having to pay a small fortune for a ticket. And being able to watch the world’s greatest operas not one day, when they reach my little corner of the world, but here and now from the comfort of my own living room. With sub-titles. END_OF_DOCUMENT_TOKEN_TO_BE_REPLACED

Although his talent had been obvious since childhood, and developed (often with what would today be regarded as excessive harshness) from his early years, Beethoven’s career didn’t really get started until 1792, when he left his hometown of Bonn in Cologne to study with Haydn in Vienna. By that time Mozart was already dead, and those who were familiar with his work viewed Beethoven as his natural successor. Although Beethoven certainly honoured this expectation stylistically in the early part of his career, it is clear that he was possessed of a confidence and determination unknown to his more self-effacing predecessor. Beethoven knew his worth and was unwilling to accept anything less than his due. END_OF_DOCUMENT_TOKEN_TO_BE_REPLACED

Salzburg, Austria, one winter’s night,
Saw the birth by candlelight,
Of a child whose name would stand,
His music know throughout the land.

1991 marked the two hundredth anniversary of the great Classical composer’s tragically early death, and in tribute the children at my primary school (or at least, in my class – it’s been a while, so I’m a little hazy on the details) learned a number of songs which told the story of his life. The words above comprise the first verse and chorus of the first song, which is about all I can remember now. END_OF_DOCUMENT_TOKEN_TO_BE_REPLACED 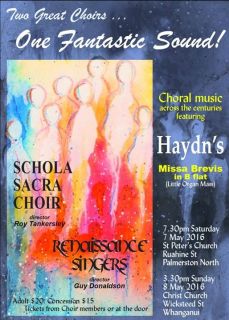 Some of you may remember that back before Christmas I was blown away by a live performance of Handel’s Messiah featuring local choir Schola Sacra. This month they were back, performing with the Palmerston North-based Renaissance Singers. Although both groups were formed in the 1970s this was the first time they had performed together, and I went along to check it out.

As their name would suggest, Schola Sacra place a particular emphasis on the performance of sacred music, with a repertoire that stretches back to medieval plainsong, although they also perform a considerable number of secular works. The Renaissance singers meanwhile place particular emphasis on the music, both sacred and secular, of the 16th to 18th centuries, although again they are by no means limited only to this music. END_OF_DOCUMENT_TOKEN_TO_BE_REPLACED

Not long after I first started primary school in the 1980s my class did a unit study on Pompeii and the ancient Romans. It made such an impression on me that while travelling in Europe in 2005 I finally realised the dream of twenty years before and visited the city famously buried by the eruption of Mount Vesuvius in 79C.E.

I am far from the first person to be fascinated by this ancient ruined city. When it was first rediscovered in 1748 the art, architecture and sculpture that emerged sparked a movement in the artistic world that would come to be known as The Classical Period. END_OF_DOCUMENT_TOKEN_TO_BE_REPLACED